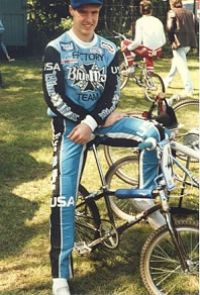 Blue what team ......? Many of you probably never heard of team BLUE MAX. The USA brand BLUE MAX was owned by Mongoose and in the early '80 s several top riders, among others Brian Gass (USA), were on the BLUE MAX BMX race team. The only rider known to have a factory ride with BLUE MAX in Europe, was Nico Does. Here a picture of Nico taken in Holland during a national championship race in 1985. I still like the design very much. The bikes were in fact Mongoose bikes and transferred to Blue Max bikes.

1985, Nico Does on BLUE MAX BMX bike and in a BLUE MAX Uniform, a Mongoose project.