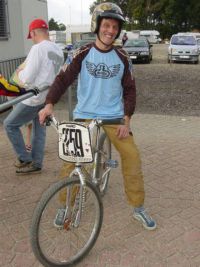 Uli was one of the first BMX racers in Germany. Started in 1979 and competed in his first international race in 1980 at the AVRO GOLD CUP TV event in Waalre-Holland. In the early days, Uli was the "face" of German BMX.

In his country he was a trend-setter at the time because he was racing in the oldest age-class at the time (16+). BMX was new and many people found it kind of strange, boys of about 16 year and older riding these small 20" BMX bikes.

Uli's dad Helmut Heidtkamp, was one of the first pioneers of BMX in Germany in the Cologne area and did a great job getting BMX off the ground as an organised sport and promoting the sport of BMX in general.

By nominating Uli, we also honour his dad (died in the early '90 of cancer) for his pioneer work.