Details
Written by Gerrit Does

It seems the Olympic virus is finally catching on. During the past 2 months, more and more publications and interviews were published in local and regional newspapers and magazines here in Holland. This gives a really good feeling, still there is a small critical note to make. Even after almost 30 years of BMX in Holland (right now I am talking about the situation in Holland only, on this subject) reporters find it necessary and it probably is, to explain once again, what the sport of BMX is all about, stands for etc.

Just recently the BOCOG, or better the Chinese organizing committee of the 2008 Olympics Beijing, revealed the remarkable Olympic Medals. This presentation took place in Beijing – China on the 500 days before the start of the 2008 Olympics. The medals do weight 150 grams and are a little bit bigger then the medals issued in Greece. On the backside these medals do have a typical Chinese design of jade. The competition to design the official medals did have 265 entries. The design of the Central Academy of Art in Beijing did win this competition. In all, 6000 Olympic medals will be produced.

Recently I received a press-release from the UCI with again some very good news. As a former UCI project manager World Cup series, it is fantastic to read the final set up of the 2007 World Cup events world wide. Also the fact that because very important points can be won here, needed for qualification for the Olympics, members of National BMX teams will have to compete at these Wold Cup series. So, probably for the first time ever since I organized the first project event in 1995 in Brighton – England, these 2007 World Cup series are what they supposed to be, world wide organized and world wide class riders competing. Congratulations UCI!

All of the above has become possible due to the fact that BMX is in the Olympics for the first time in 2008, in Beijng – China. National organizations are now willing to invest in BMX teams to compete in World Cup event, were in the early days, riders almost had to pay their own way to the World Cup events. A very important development, that has been going on already for some years is the fact that experienced former Old Skool BMX' ers are getting back in the sport as organizers, trainers, coaches, officials and so on. Recently I was informed of the fact that Mike King former BMX, Down-Hill, Four-cross champion and sports hero was been named Director of BMX Programs at USA Cycling. Again very good news, congratulations Mike!

One of my slogans is "A SPORT WITH NO HISTORY, IS NO SPORT". Well, the history is building up slowly. This year the ABA – USA celebrates its 30th. anniversary and you would almost not believe it, but next year 2008, BMX exists in Europe 30 years as well. Official organized BMX racing, with rules and regulations, with an official recognized organization, started for the first time in Holland – Europe some time October 1978. As it looks now, there will be an official celebration of this 30th. anniversary of BMX including several activities and set up at an European (international) level.
Rumors are that the former PONYPARK SLAGHAREN will host a weekend event, some time September 2008, inviting European Old Skool BMX'ers, officials and so on, celebrating the 30th. year of the existence of BMX in Holland and Europe. It would be great to have a European Olympic Champion present then too! Who knows!  More information will follow soon.
Gerrit Does

Chandler , AZ : The ABA Winternationals have a long tradition of excellence, and this years' annual event at the Black Mountain BMX track is bound to give BMX racers young and old something to talk about for years to come. As the ultimate way to kick off ABA 's 30 year anniversary, there will be the biggest gathering of BMX Hall of Famer's and racing legends.

Numerous other BMX legends and Hall of Fame nominees will also be in attendance.

Following the first round of pro racing, the ABA – along with Redline Bicycles, will hold an autograph signing in the RL pit area. Custom posters have been made to commemorate 30 years of ABA history; which feature every No.1 Pro in ABA history.

Later that night, at an undisclosed location, will be an invite-only ABA BMX Reunion – with graduating classes from the Pro ranks in 1977 to present day.

Much of the retro Reunion will be covered in BMX'er, BMX World, ABABMX.TV, by Armen (DVD documentary on BMX racing). Look for more of ABA 's 30 Year Anniversary celebration throughout the year – including special edition issues of BMX'er magazine.

Through my good friend Greg Esser, I received some information on a fantastic REUNION that was organized during the March 23rd. weekend last month. Greg told me all Old Skool Pro's present had a great time, lots of fun and talked history and crazy stories came up.

First I planned to be present too at this Reunion (being an ABA Hall of Fame member and about from the same periode as most of the Old Skool riders present, 1974 and on. After hearing all  of the stories from Greg, I realy was sorry I couldn't come due to work.

Another good friend of mine Gork, marketing director of Redline Bicycles, did sent me these two nice pictures of the Retro Redline Team. Pictures taken during the Reunion weekend. Recognize everybody in the pictures? Read what they are doing today as well.

From left to right:

Greg Grubbs  =   working in TV/movie industry
Stu Thomsen  =   Orange County Sherrif and still racing for Redline under the "Lifetime Sponsorship Program".
Dennis Dain  =   has been a UPS driver for 25 years (thus explaining why he can fit in to the same Redline jersey he wore on the May 1979 cover of BMX Action.
Greg Hill  =   now working with Mike Flaugherty for Atomic.
David Clinton  =   head of sales with Manitou (just bought by the Hayes Bicycle Group)
Bob Hadley  =   working for Razor USA (along with Billy Griggs, who couldn't make it to the Reunion due to a wedding).

From left to right:

Throughout the day, spectators and collectors walked down memory lane, and got to vote for their favorite BMX bikes in 8 categories:

Meanwhile, on the BMX track, it was " Clash of the Dinosaurs – Round 2 ," with a record-making 17 sidehacks showing up … including the "WASP 11" hack piloted by the Godfather of Sidehacks; Dennis Dain (Remember – Dain for Hall of Fame '07!) and Rick "Reilly-1" Gayton. The Hack race was won by Phantom-OnTrac's young guns of Nic Long and Rusty Nesvig.

Dennis at BMXweb.com just posted up all of the pics from the event. For some great photos, go to: http://bmxweb.com/vintagebmx/

Results from the 2 nd. Annual Meet are below. Thanks to all who showed up – we're already looking forward to doing it again next year!

This event took place at a new site were a very spectacular track was laid down in Victorie - BC, Canada. It was a 4 day event and this Worlds did have around 2500 entries from 40 nations. CBC Sports Television and Country Canada (cable tv) were showing the Elite men and women action live on TV.


The result of the World Championship classes were as follows:

Team competition results: TRADE TEAMS.  Early on this year, the UCI decided NOT to have any Manufacturer Team Championships anymore from now on!

Results in the Challenge classes:

The "Good Luck Beijing" 2007 UCI BMX Supercross World Cup took place at the Laoshan BMX Venue, a 1.89 hectares of land, with grandstand holding 2000 seats for spectators and 190 seats for the media. The same venue and track will be used for the Olympic Games in 2008.

Around 140 riders entered this "test" event and judging the results of this World Cup, western countries will dominate the sport with 18 European and 8 American riders entering the men's last 32. On the women's side, Europe and the United States combined for 11 spots in the top 16. Besides, Australia is also making progress, as many of its riders cruised into the second round. On the contrary, all the Asian riders were eliminated in the group races.

BMX celebrates its 30th. anniversary as an official registered organised sport in Europe in this year 2008, 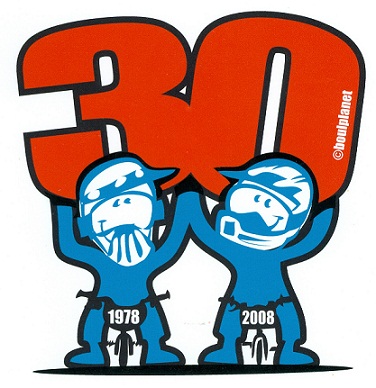 April 25th, the mayor of Waalre presented to Gerrit Does, the "Ridder in de Orde van Oranje Nassau" decoration, in the name of our Queen Beatrix.

This came as a total surprise for Gerrit Does. On that day (GD) I was ready and waiting for Louis Vrijdag to leave for the BMX Veteran Cup in Weiterstadt Germany. Suddenly about 10 people came through the backyard, all dressed up and I was asked to change my motorcycle outfit into a suit. I had to come with them to the townhall. There it became clear to me that a group of former BMX racers had applied for a Royal decoration for me. Together with 7 other citizens of the town of Waalre, I was decorated. Two of those eight were decorated with the "Knighthood in the Order of Oranje Nassau" and I was one of them.

The motivation to be presented with this knighthood was: Starting BMX in Holland in 1978; promoting the sport of BMX in Holland and Europe; Chairman of the BMX Committee KNWU, foundermember of the I.BMX.F. (International BMX Federation) and acting as General Secretary during 5 years of this world wide governing body; Initiator of the national broadcasted AVRO TV BMX series during 4 years; Organizer of the 1st. outside the USA BMX World-Championships in Slagharen - Holland in 1983; organizer during 10 years of the E.C.C. (European Challenge Cup) events at the Ponypark - Slagharen in Holland; Teammanager of among others the Dutch KNWU National BMX Selection, Team AMEV and later on several other so-called international factory teams like Mongoose - MCS - GT and WEBCO. GD has also been activ as project-manager UCI BMX World Cup events from 1995 till 1998.

Again, the whole event was a total surprise. Afterwards Louis Vrijdag en I still left for Germany. For a short report see underneath.

Right after the ceremony in Waalre, were I received the "Order in the Knighthood of Orange" from our Queen, through our Mayor of Waalre, Louis Vrijdag and I still got on our motorcycles and we left for Weiterstadt - Germany to be present at the 14th. Veteranen Cup there. I was a nice motorcycle ride and we enjoyed ourselves very much during the actual Veteranen Cup event and price giving ceremony. Here some pictures to give you all just and impression of the event.

Here the results in the Challenge classes:

The results of the first ever Olympic Games for BicycleMoto-cross. Event helt at the following venue: Laoshan Cycling Centre, Beijing, China. Around 8.000 spectators were present.

The Latvian Olympic Committee issued a special book on the 2008 Olympics and how its sportmen and women performed during these Olympics. On the front cover a picture of the first ever Olympic Champion in BMX, Latvian Maris Strombergs. Here some pictures of that book.

Late 2010 a picture was sent to me of the BMX Olympic track in Beijing - China. Very sad to see that there probably has been no follow up on maintaining the Olympic track or even start a club at this fantastic location. In my opinion a waist time, energy and lots of money (750.000 dollars !). This is how the Olympic track looked like ending 2010, two and a half years after the Olympics.

The Latvian Olympic Committee made the best out of the fantastic result of Maris Strombergs winning the Olympic title. Special stamps were issued In Latvia and envelopes printed. Here an example of what they produced and which items they did sent to me.

An event was scheduled to celebrate 30 years of BMX in Holland and therefore Europe. The S.F.N. was the first official registered BMX organisation in Europe and started on October 19th. 1978. The celebrations would have taken place at the Amusementpark Slagharen (former Ponypark - Slagharen) in Holland, however, due to illness of the organizer Gerrit Does (meningitus in July 2008), the celebrations were postponed till October 2009.