Together with Alain Kuligowski, René Nicolas introduced and started organising BMX in France.

Up and till today René Nicolas is involved in BMX (works for FFC). 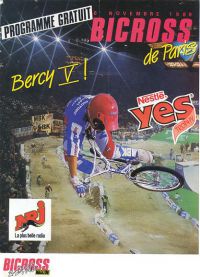 Responsible men within the Lariviere Organisation were Mr. Alain Kuligowski in the beginning and later on Mr. Didier Coste (both men were "Chef Redaction" of the Edition Lariviere group).

King of Bercy events and Free-style included. Top Americans were invited and present. All events were broadcasted Nation wide on TV.

This event has been an absolute marketing tool for BMX and was a good mix of sport and entertainment. Up till this day a unique event.

The last event organised at Bercy-Paris was in 1990.