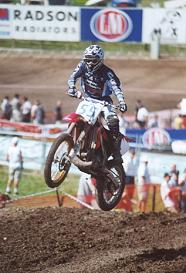 Update April 2003: BOYD KARSMAKERS, former MCS Euro teammember (1990) and nephew of Pieter Does, has signed a contract for a new sponsor and is now racing on Suzuki 250 cc machines, mainly in Holland, Belgium, France and Germany. Boyd changed from 500cc to 250cc, fitting his abilities and physical constitution. For sure he want to win back his Namibian National title which he won in 2001 and lost last year, due to a crash in one of the events of this 3 round series. 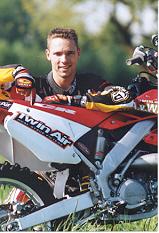 Home racer Colin Dugmore of South Africa had to settle for 2nd place and South-Africa's National Champion Ryan Hunt finished 3rd overall. 25 riders from 13 different countries took part in this 3 round series for the Namibian Moto-cross Championship. Again a former BMX'er doing very well in another sport discipline. Boyd, among others, was a member of the Sinisalo and later on famous MCS-Europe BMX team.