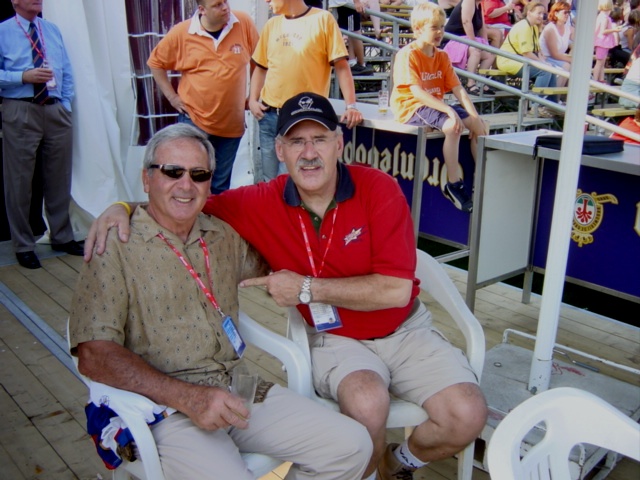 Seen on this picture are two men that have over 55 years of National and International experience in BMX. GD did meet for the first time with Bob Tedesco in Pompano Beach Florida - USA, when original founder and at the time leader of the NBL, Mr. George E. Esser was in charge. At the UCI Worlds in Valkenswaard the two Grandfathers of BMX did meet again since 2001. Bob in his mid-sixties now and Gerrit almost sixty years old, have been talking about the early days of BMX and special international BMX, which started during the 1979 JAG BMX Worlds in Indianapolis  USA, when the I.BMX.F. was formed.

Both men could write several books on the history of international BMX for sure. Bob Tedesco has been a very important player in international BMX and has to be mentioned here in the Meeting the VIP's section. On the picture Bob (USA) and Gerrit (NED) relaxing during the 2004 UCI BMX Worlds in Valkenswaard - Holland. Seen here over the Grandfather of BMX, over 55 years of BMX expertise.